Self-regulation for Children and Adults

To Meet your Specific Needs

EEG Biofeedback, also known as EEG Neurofeedback, is an approach that is gaining momentum as a non-invasive intervention to regulate the brain and improve function. However, the consumer is often left bewildered as to the many forms and approaches. FAQ’s can provide the answer to common questions that a consumer must ask when looking for a provider.

The first and most important consideration is whether the provider is Board Certified in EEG Biofeedback (BCN) though the only certifying body, the Biofeedback Certification International Alliance.

Neurobehavior Therapy, PC uses the most advanced platform currently available in the field of EEG Biofeedback. A 19 channel quantitative EEG (qEEG) brain map begins the process, using a well-respected scientific data base; anything less than 19 channels is NOT a quantitative EEG. Sometimes the term “brain map” is used interchangeably with a “qEEG”. They are not the same. In addition, the normative data base should be independent of the training platform.

Low Resolution Electromagnetic Tomography (LORETA) EEG Biofeedback is the only form of intervention provided. It requires the use of 19 channels of training, for children and adults. The brain is much too complex to expect two or four channels to fully address symptoms, especially those that are more complex such as Autism, Traumatic Brain Injury, and Dementia.

LORETA does not utilize any electrical current, despite the name. Rather, it has the ability to triangulate data from surface EEG (cortex of the brain) with deep brain regions that do not generate the EEG. It is a very complex form of training but it has the capacity to induce changes very rapidly with no side effects. It is individualized to the client and depends upon the data obtained from the qEEG.

Why is Board Certification through BCIA so important?

In order for Neurofeedback to be effective a 19 channel QEEG or Brain Map should be used to evaluate neural or brain networks. Results of the Brain Map in conjunction with clinical symptoms are then used to direct neurofeedback training. Without this important tool, guesswork is used and the training process is either ineffective or generalized in its effect. 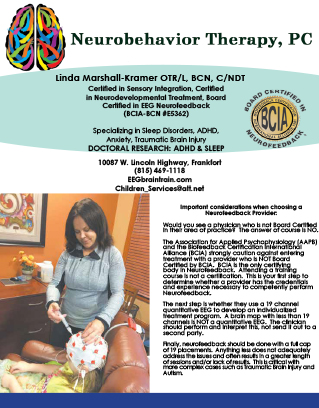 He started playing better with his cousins and with friends. They would even look forward to playing with him. They would play for hours and there would be no fighting, I couldn't believe it. I wasn't holding my breath any more waiting for things to go bad. When I talked to his teacher, I told her that he struggled with his peers and she said that she didn't notice that. Did she really just say that!

How Effective is Neurofeedback?

Frank Duffy, MD, Neurologist, Head of the Neuro-imaging Department and of Neuro-imaging Research at Boston Children’s Hospital, and Harvard Medical School Professor, conducted an independent review of the literature on neurofeedback for Clinical Electro-encephalography (2000). He summarized his findings as follows:

“The literature, which lacks any negative study of substance, suggests that EEG biofeedback therapy should play a major therapeutic role in many difficult areas. In my opinion, if any medication had demonstrated such a wide spectrum of efficacy, it would be universally accepted and widely used.”

Katie Campbell Daley – In a recent paper Update on attention-deficit/hyperactivity disorder published in Current Opinion in Pediatrics she reviewed the research and practice standards on treatment of ADHD. Dr. Campbell serves on the staff of the Department of Medicine, Children’s Hospital Boston and in the Department of Pediatrics of the Harvard Medical School. She concluded:

“Overall, these findings support the use of multi-modal treatment, including medication, parent/school counseling, and EEG biofeedback, in the long term management of ADHD, with EEG biofeedback in particular providing a sustained effect even without stimulant treatment…parents interested in non-psychopharmacologic treatment can pursue the use of complementary and alternative therapy. The therapy most promising by recent clinical trials appears to be EEG biofeedback.”

“EEG biofeedback meets the American Academy of Child and Adolescent Psychiatry criteria for clinical guideline (CG) for treatment of ADHD, seizure disorders, anxiety (OCD, GAD, PTSD, phobias), depression, reading disabilities, and addictive disorders. This suggests that EEG biofeedback should always be considered as an intervention for these disorders by the clinician.”